What’s new is old; and, what’s old is new again…

Traditions exist because there are individuals who find something, or some things, worthy of passing on to a future generation.

Traditional martial arts exist because there is something, or some things, a generation wants to have passed onto it.

The mindset on martial arts changed dramatically on November 12, 1993 – The premier of the first Ultimate Fighting Championship. Prior to this, visions of the “deadliest techniques” and the idea that “my fighting art is the best martial art” ran rampant in the minds of anyone who had ever formally learned to throw a punch or block a kick. In each of our respective training arenas, we were invincible. But for the most part, most of that was in theory – “If he does this, I’ll do this… and if he continues from there, I’ll do this… “
What I’ll do often defined what we trained; what he’ll do often determined how we trained. The problem was that what he’ll do was something that we all did because, typically, we trained in the same exact techniques since we went to the same school. And, anything different was what we imagined someone else would do from what we had heard, read, or seen at public demos about their styles.
That was just the way things were in a very traditional school.
Anyone who tells you any different has a very peculiar opinion not only about their traditional martial arts training, but more so, about reality.

Then, in 2006, YouTube exposed us to everything and anything – period. And again, it changed the way we looked at martial arts all around the world. At the click of a mouse, you had access to nearly every martial art ever created – a virtual library of qinna locks, triangle chokes, knife disarms…
every way possible to disable, maim, or make someone tap out.

To this day, the site is ever growing with demos, infomercials, and pirated footage of all of the above and more.

But in many ways, it still leaves you with a hollow feeling. Perhaps it’s information overload. Or, maybe it’s a sense that “I have access to it all already. So what?” Or, just, “It’s not that impressive.”

So it takes us back to where we started: traditional martial arts.

Is it for everyone? No, because no one is the same. Everyone’s wants and needs are different.
Quite honestly, if I were growing up today, MMA (mixed-martial arts) would be my thing simply because it’s what’s out there – right here and right now, the same way boxing, Judo, Karate, Tae Kwon Do, Kung Fu, Ninjutsu, Aikido, and Brazilian Jiujutsu were there for those of us who grew up during those respective eras.

A traditional martial art humanizes us during these technologically-driven times. It offers an environment of customs and cultural heritage, fighting strategies and philosophical structures, stories of both inspiration and aspiration (whether true or highly exaggerated), protocols for a sense of civility and community, and most of all, a sense of self-awareness and personal growth. You not only acquire a set of physical fighting skills, but more so, you obtain the tools and mindset to prepare you for the biggest challenge of all – LIFE. Its comprehensive package addresses many of the “gaps” that we may experience on our martial quest. And as long as it provides you with a balance in your life, and doesn’t develop into a cultish mentality, it can be your spiritual salvation.

In this time of modern martial sports, enthusiasts and experts alike have gone to explore the vast possibilities of combative systems around the world, and the research and results have yielded one overwhelming response: There is no perfect martial art. It’s whatever works best for you.
But, having a traditional background can provide you with a strong foundation that will enable you to navigate through the negativity and uncooperative obstacles that you will encounter in the arts and even more so, in your life.

It’s ironic that over time, the culture of MMA will be considered “traditional” to a future generation of martial explorers.
Posted by New York Pak Mei Kung Fu at 4:20 PM No comments:

The 1970s were a most interesting time in New York City.

Skelly and stickball games preoccupied playtime on the asphalt jungle. Technology was the LCD watch and Pong. TV needed rabbit ear antennas to receive three network VHF channels: 2, 4, and 7; 5 and 11 always showed reruns – Channel 11 must have owned The Honeymooners and The Twilight Zone because they were always on; 9 was one of those weird local stations; and, 13 was known for The Electric Company and Sesame Street.

Rotary phones hung from walls or sat on a wooden stand almost specifically designed to showcase this social networking device. They were brontosauruses of the phone world compared to today’s cellular raptors. But there’s something very nostalgic, even romantic, about that rotary sound – the clicking of the dial that went back to its original position each time your finger wound the seven digits within your own area code (things were much simpler back then). It was such a part of your life that you would almost feel as if something was missing if you made a phone call and didn’t hear that rotary melody. That’s probably why some phones have a pulse mode (that serves absolutely no purpose in today’s technological times) in case you missed that sound.

Something missing… that’s probably why things get started – to fill a void.

You only begin to realize this over time.

It was also during this period that an Asian martial art seemed to dominate this decade.
It really did seem as if “Everybody was Kung Fu Fighting” according to Carl Douglas in 1974 when Jet Li visited and performed an intense 2-person fighting routine for President Nixon at the White House lawn. Just a year before, Enter the Dragon starring Bruce Lee exploded onto the theater screens and oftentimes spilled over onto the streets after the movie as well. The Sun Sing Theater on East Broadway and The Music Palace on the Bowery were places where you would go to if you practiced Kung Fu or were a non-Chinese looking to be awed by the martial action that you saw on the screen – either way, you needed to know some form of Kung Fu or “run fu” to dodge the occasional stray bullets that came from overly ambitious teens looking to prove their worthiness to their peers (if you know what I mean). And on the small screen, momentary flashbacks of Master Po and the young Grasshopper gave home viewers a glimpse into the romantic ideals that “Kung Fu” had to offer.

Under these ubiquitous conditions, Kung Fu had no place to go but up on the ladder of martial arts.

It gave Chinese and Chinese-Americans a presence in a country that was just beginning to embrace, rather than curse, its multiculturalism.

For Chinese-American youths, boys in particular, it was more of a curse than a blessing. The blessing was, you got picked on a whole lot less because the bullies were never quite sure if you really knew Kung Fu or not. So, chances were, they didn’t want to take that chance and you got to keep your lunch money for another day. On the other hand, your lunch money and a whole lot more could be taken away from you if you didn’t accept “membership” into a “club” that would help “protect” you not just by learning Kung Fu (if you know what I mean).
So, like the Green Destiny – the straight sword in Ang Lee’s homage to Chinese swordplay films: Crouching Tiger, Hidden Dragon, Kung Fu was double-edged.

As if your tween and teen years weren’t bad enough walking a tightrope of friendships and fiend-ships, you had this to deal with. So I retreated to the cave of my home to meditate on articles in New Martial Hero, Real Kung Fu, Secrets of Kung Fu, and Inside Kung Fu magazines; classics by Donn Draeger, Kam Yuen, Bruce Lee & M. Uyehara… My appetite for all of it was insatiable. And, as with anything, there’s always one or two that stand out in your mind – always. For me, it was this dark blue hardcover book draped in a bright mustard-colored dust-jacket. Maybe it was the color; or the glossy photos in between; or the very brief manner in which the style and its master were described.
But it caught my attention and stayed with me – like a splinter in my mind. The book was called Pak Mei Kung Fu: White Eyebrow by H.B. Un, © 1974. 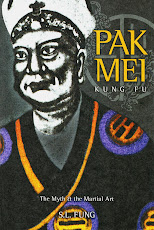